STAY UP TO DATE

On Sunday 5th of November, Dr Roanna Lobo, Victoria Sande (Masters of Public Health student) and I set off to Canberra for the 2017 HIV & AIDS ASHM Conference. Victoria Sande received support from Australasian Society for HIV, Viral Hepatitis and Sexual Health Medicine, the Department of Foreign Affairs and Trade and the Town of Victoria Park to support her travel. Victoria Sande co-presented work she volunteered on, titled Barriers and enablers to HIV testing among people born in sub-Saharan Africa and South East Asia. This project involved 77 participants in focus groups across NSW, WA, Vic and SA, and was supported by a grant from Gilead Sciences Pty Ltd and a Healthway Graduate Scholarship by Australian Health Promotion Association.

Take home messages from the conference

6th November – Opening Plenary
Monday morning started with a Welcome to Country by Wally Bell, a Ngunnawal elder from Yass; and a government welcome from Dr Richard Di Natale, Leader of the Greens and Senator for Victoria. Dr Bridget Haire welcomed us on behalf of AFAO and used the opportunity to push for the rollout of PrEP, to allow equal access to all regardless of location. She concluded with a strong message, “The epidemic will not be over for anyone until it’s over for everyone.” Cipriano Martinez from National Association of People With HIV Australia (NAPWHA) urged for us to expand our reach to other priority groups – sex workers, people who are transgender, mobile and migrant populations and women - stating that “everyone is deserving of our care, no one should be left behind.”

Dr Adam Bourne from La Trobe University showcased his work on combination prevention across a number of countries. He emphasised the need for combination prevention – biomedical (PrEP, U=U), behavioural and structural; and described the apprehension of many men, after 30 years of being told to always wear a condom, to adapt to the modern HIV response of safe sex. He suggested that health promotion needed to include a focus on men’s sexual pleasure and suggested this positive framing could increase PrEP uptake.

Monday morning sessions on ‘Test and Treat’ presented NSW, Victoria and national data. The message here was consistent– people who are born overseas (particularly from South East and North East Asia), heterosexuals and Aboriginal and Torres Strait Islanders have low HIV testing uptake and are the bulk of the proportion of late HIV diagnosis. Of particular interest was Dr Sara Bell’s talk on the ‘Acceptability and Feasibility of an Integrated HIV Self-Testing Service Delivery in Queensland’ – you can view a summary of her talk here.

In the afternoon was a session on ‘Addressing Access and Inequality in Australia’s HIV response.' Of particular interest was Prof Darren Russell’s talk on the ‘Complexities of providing prevention tools to a vulnerable population; lessons from an outbreak in young Indigenous people in Far North Queensland.' Here he described the challenges of the current outbreak, occurring mainly among young Aboriginal males, and offered some solutions to address this. A short summary of the talk is available here.

Victoria Sande and I presented at the late afternoon session on ‘Working with migrant communities’. This theme really showcased the heterogeneity of this group – men who have sex with men, heterosexuals and sex workers (to name but a few). Community-led projects were at the heart of most of these talks, and it was inspiring to hear about such fantastic work going on in NSW and SA. 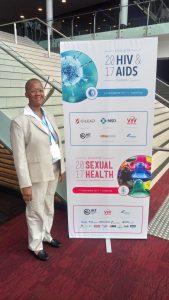 7th of November – HIV self-testing
Tuesday’s afternoon session ‘Initiation, testing and diagnosis’ included two presentations on HIV self-testing – Dr Mark Bloch on the usability (the ability to correctly use the device) of the ATOMO device and Dr Anna McNulty in NSW on the HIV dried blood spot test. Bloch’s work demonstrated high-usability of the self-collection device and suggested that self-testing could be a viable option to accessing testing in the Australian community. McNulty’s presentation showcased work from NSW in which a dried blood spot test could be posted out to individuals. Of the 505 that registered for the test, 77% were MSM, 5% Aboriginal, 26% from Africa or Asia, and 11% CaLD heterosexual. Of most important was that 56% had never tested, or had a previous test more than two years ago – showing that this may be a method to increase testing in those not regularly engaged in healthcare. More about this presentation is available here.

8th of November – HIV self-testing
Dr Jeffery Klausner, Professor of Medicine at the University of California, presented on ‘Self-testing for HIV Infection and other STDs’. He presented ways in which HIV self-testing has been disseminated in community-based settings – for example, the use of vending machines in private areas of sex clubs in Los Angeles, or banners on applications such as ‘Grindr’ where eligible participants can receive a free testing kit via mail, or receiving a redeemable voucher at a pharmacy (read more here). He stressed the urge to give individuals options on how they would like to test for HIV, and the need to link people who receive a reactive test to treatment and care as quickly as possible.

Hidden groups
Dr Roanna Lobo co-chaired a session on ‘Who is left behind in the virtual elimination of HIV?’. This session focused on preventing HIV in sex workers, Aboriginal and Torres Strait Islanders, heterosexuals, trans and gender diverse people and culturally and linguistically diverse groups. Panellists were asked what does the ‘virtual elimination of HIV’ mean for these groups? There was consensus that a reduction of HIV in gay and bisexual men would be ‘close enough’ and these groups would be left behind. The discussion also considered sub-groups at high risk within these groups and the role of service providers in ensuring that all individuals are provided a HIV test, whether or not they ‘look like’ they might be at risk. The impact of social and structural factors (in particular poverty) was discussed, with a take-home message that we also needed to address the social determinants of health in the HIV response.

Following this session there was a panel discussion in the community hub coordinated by Australian Federation of AIDS Organisations (AFAO) where the conversation continued and included the prevention of HIV in mobile and migrant communities. 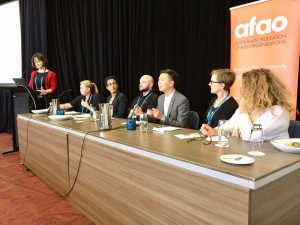 For vodcasts and slides from all presenters, please visit http://www.hivaidsconference.com.au/

We’d like to thank ASHM, the Department of Foreign Affairs and Trade and the Town of Victoria Park for their travel support to Victoria Sande.